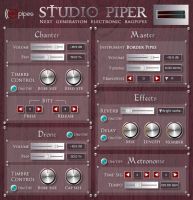 Studio Piper is a complete virtual bagpipe system. It has been developed with world renowned, gold medalist, multi-award-winning piper; Fred Morrison, and the Centre for Music Technology at The University of Glasgow, Scotland. Each stage of the production was personally overseen by Fred, working along-side former Tom Oberheim engineer, Bill Evans.