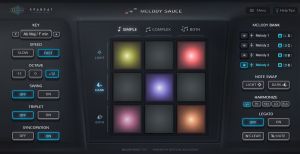 Since the plugin's release last year we've been blown away by the response from hip hop and trap producers particularly in the US, so we've been looking at ways to strengthen the output in those areas and make it even more useful to trap hip hop and trap makers. We did a bunch of analysis of popular current hip hop and trap styles and used that to tweak the algorithms, whilst retaining all the elements that make the output work with other genres from house to techno and pop. Tweaking the algorithms is something we're constantly doing to keep pace with the constant shifts in contemporary music styles.