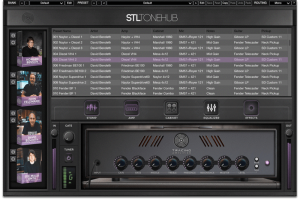 STL Tones has released STL ToneHub with a special offer.

STL ToneHub is a plug-in platform that hosts guitar and bass preset packs from artists in the music industry.

This is the most powerful plug-in we've ever made. You can access our ever-growing roster of artists and producers in one easily accessible platform in addition to our entire range of Kemper & Axe-Fx packs in plug-in format.

The core amplifier behind the scenes of the ToneHub plug-in, is the powerful Tracing Amplifier. STL spent over 2 years designing this amplifier from the ground up, to not only be able to capture the precise characteristics of the huge variety of hardware amplifiers in today's market, but also have the important real-feel when plugging in and playing.

The ToneHub audio core is based on a hybrid engine, combining STL proprietary Tracing Technology and analog modeling to get an accurate sounding snapshot of a guitar or bass chain, from pedals to amps, cabs, mics and preamps with the possibility to change the settings maintaining realism.

Hardware sounds without the hardware

The parametric parts of the rigs within ToneHub are analog modeled, meaning you can tweak the controls and maintain the exact behavior of the original device. Changing the Gain control will not just increase the signal going inside the amplifier, but it will change the frequency dependent gain structure according to the circuit of the amp that was Traced.

Tonestack controls, and even microphone positions in the numerous presets you can find in every pack are set as in the real chain during the Tracing process, which means you can adjust them and refine your tone, experiencing the same behavior you would expect from the real rig instead of a coarse approximation.

Additional Bias and Sag controls help you get the correct poweramp feel by changing the headroom and dynamic response of the virtual circuit.

The cabinet plays an integral role in a complete rig's overall tone and character. The Cabinet Module within STL ToneHub has been engineered to allow you to:

The stomp section has an ever expanding selection of versatile virtual pedals, including compression, and numerous Overdrive models.

Expand your tone by diving into the Effects Module of ToneHub. STL Tones advanced modeling lets you customize your time base effects, along with modulation for more depth and feel.

The Master EQ module within ToneHub is a tool for shaping your tone. With an extended frequency range, you can add air and sheen. Featuring classic Hi-Pass and Lo-Pass controls, paired with 36dB excursion Hi-Shelf and Lo-Shelf filters in addition to two fully parametric peak controls with adjustable bandwidth, whether you need tone shaping or surgical equalization, this module aims to allow you to craft any type of tone to fit your mix with ease.

Intro Price: $149 (save $50), along with the choice of 1 free preset pack from the ever-growing roster until April 17th.