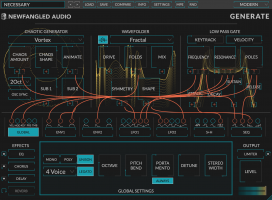 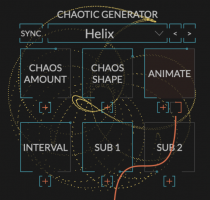 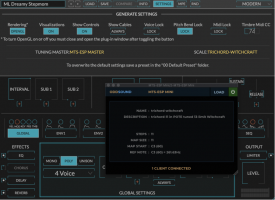 Newfangled Audio's flagship polyphonic synthesizer—Generate—is getting its first major update to version 1.2. Here's what they say:

Building up from the instrument's already robust feature offerings, presets, and sounds—which are as useful as they are easy to use—this synth, based on a chaos generator (oscillator), can be used in 1, 4, or 8 voice modes, all of which are routable through the onboard effects: eq, limiter, chorus, delay, and reverb. Create beautifully complex pads, warm moving keys, jittery sequenced basses, out-of-control leads, and otherworldly textures at the touch of a button with the new chaotic generators.

The Generate 1.2 Polysynth is enhanced with a great number of user-feature requests, as well as sound generation additions, more precise and creative controls. To explore this latest version, we created a fully composed piece of music using only the New Presets in the Generate.

Charting the entirely New aural waters and vast vivid sonic tapestries with this easy to use polyphonic powerhouse—we are beyond impressed with just how quickly it was to download, install, and call up distinctive sounds, timbres, and textures for use in a song instantly.

Price: $99 - The update is free to existing Generate customers. They can download it here.

Find Generate in the KVR Marketplace