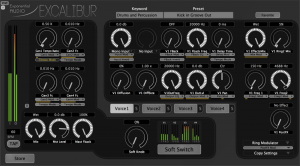 Special introductory pricing will be available.

Find Excalibur in the KVR Marketplace