Ftec-Audio has announced the release of version 1.0.4 of HV-Formant - the worlds first "Heptaverton Surround" VSTi softsynth (v1.0 was released in March). HV-Formant is based on a DIY modular subtractive synthesiser from the late seventies called the "Formant". The Formant was developed by C. Chapman and the DIY project was published in the Electronic magazine Elektor of 1977/78. 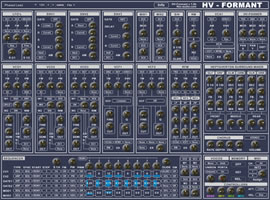 Heptaverton Surround
The HV-Surround format is an experimental surround format that Ftec-Audio has been developing since 2004. The format is based on 6 speakers equally distributed over a 360 degree circle around the listener (the seventh point). The principal is that the product in the centre, at the seventh point, the listener, is more than the sum of the six surrounding points (the sound production of the individual speakers).

HV-Formant costs €69 and is available for Windows in VST instrument and stand-alone formats.