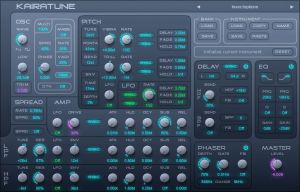 Futucraft has announced the release of Kairatune, a monophonic virtual instrument designed to produce crisp and tight electric sounds. Kairatune is engineered for the demanding producer who needs to push the sound to extremes without compromising audio quality.

Kairatune offers fast and intuitive sound design workflow. The user interface is designed for a musician rather than an engineer and is based on the concept of pitch and tempo in contrast to frequency and time. Kairatune lets you travel in the world of beats, notes and intervals instead of the logarithmic mathematics of frequencies and the rarely useful absolute time.

Kairatune is not your all-in-one synthesizer. It's designed and engineered to be as powerful and versatile as possible in its target role as your source for tight bass, unique lead and shiny SFX sounds. At the same time it makes all the effort to be simple enough to use, enabling you to add your personal touch and flavor to the sound and seek for the perfect fit to your mixing preferences.

The generator section has just one multi-oscillator. The basic waveform generator is very simple adjustable mix of sawtooth and square wave. The multi-oscillator generates five waveforms whose relative pitch, phase and amplitude may be configured and modulated enabling a rich set of tones. The multi-oscillator uses quite unusual technique that generates a single fundamental signal independently of the (multiple) overtones, preventing the beating effect that arises where several oscillators are output in slightly detuned unison, yet preserving the full and fat sound on the overtone spectrum. The method enables building very rich and vivid sounds on a perfectly solid bottom and is especially useful in creating tight bass and low register lead sounds.

Kairatune is free and is available for Windows as a VST instrument plug-in.