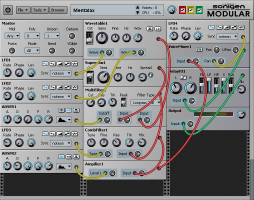 Sonigen has announced a new beta version of Sonigen Modular is available for download.

The main new features are Controllers and Modifiers:

The main point of these additions is that they make it very easy to do what would probably involve a whole module and some extra cabling in most other modulars. In Sonigen Modular it is a few clicks and a small icon.

There have also been some improvements to the graphics.