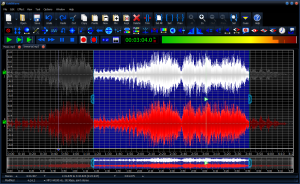 GoldWave Inc. has announced that v6.10 of GoldWave, the audio editor application for Windows, is now available. GoldWave v6 requires Windows 7 64-bit or later. It will not run or install on any older or 32-bit versions of Windows.

GoldWave v6.09 was the first non-beta release in the v6 line. GoldWave v6 is a major update to with many changes across the entire program, primarily for multichannel support for up to 8 channels and 64-bit executable for accessing more than 2 GB of memory. The WhatsNew file located in the folder where GoldWave is installed lists all the changes.

Larger tool bar buttons, themes, and many other interface changes have been made to improve usability. The old compiled help system and manual have been replaced with a unified help file in standard HTML format.

This upgrade is free for licensed users, but you must enter your current license into the program again. Pricing starts at $19 for new customers.