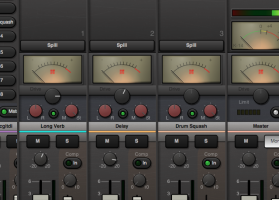 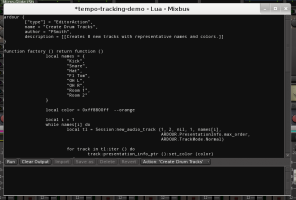 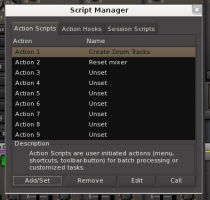 Harrison Consoles has announced the release of Mixbus32C v4 - the latest generation of its "True Analog Mixing" workstation.

Mixbus32C is a full-featured DAW with all the features of a typical workstation: unlimited audio+MIDI tracks, unlimited plugins, virtual instruments, cut/copy/paste editing, and import/export in various formats. But Mixbus32C is much more than that. It incorporates a customized mixer developed by Harrison: a respected manufacturer of customized high-end audio consoles since 1975. You can learn more about Mixbus32C, and get a demo, from Harrison's website: Harrison Consoles: Mixbus32C

Mixbus32C is everything its users love about Mixbus, with the addition of the renowned 32C EQ in every mixer strip. v4 adds hundreds of new improvements to the platform.

New User Interface
Mixbus's new & updated GUI answers user requests for a better window management, and it allows the transport controls to appear above the mixer. The new "mini-timeline" allows fast & easy locating directly from atop the mixer window.

Toolbar Customization
The transport controls have been streamlined, and are configurable to hide & show the elements that are needed during the different stages of production: recording, arranging, editing, mixing and mastering. Visit Preferences->Appearance->Toolbar to turn the various sections on & off. You'll find a great opportunity for customization, while still remaining sensible and recognizable if you have to work on someone else's computer. (click here for larger transport image)

Per-Bus Panning from inputs
Evoking the "dual-concentric" knob design from the MR-series consoles, this new feature allows you to pan your Mixbus sends separately from the master bus pan knob. Use this technique to pan your reverb sends opposite of the dry signal, for a wider stereo effect.

Stereo Width on buses
The latest-generation "True Analog Mixing" engine has been updated with a stereo width knob on the console mixbuses. The width knob varies from stereo to mono, and its primary purpose is to reduce the stereo width of reverb effects (similar to using a mono bus send to your reverb effects, in an analog console). After reducing the stereo width, you can pan the reverb image to one side or the other.

VCA Faders
You may create an unlimited number of VCA faders, and attach them to your tracks and buses; then you can use the VCA's fader to adjust the slave's fader level, or trigger a Mute or Solo on the slaved channels.

Input Channels (tracks and mixbuses) may be assigned to an "unlimited" number of VCAs, allowing the user to control a snare drum from 3 VCA faders: the snare, drum, and all-instruments VCA groups (for example). This flexibility is derived from Harrison's large-format console VCA implementation.

"Spill" Buttons
The "Spill" button hides all channels except those that are attached to a VCA fader. Mixbuses now have their own "Spill" buttons, so you can immediately show the channels that are sending to the mixbus. This is great to immediately show which channels are feeding the "Drum" bus, or the Reverb. By combining the use of VCA Spill and Mixbus Spill buttons, you can organize much larger sessions than was practical in v3.

New Recording Features
Global controls for a track's input-monitoring, as well as improved support for pre-roll recording and several UI improvements, greatly improve the usefulness of Mixbus for tracking a live band. For example you can mouse-wheel on the metronome button to adjust the click volume, or right-click on it to take you directly to the metronome preferences. Combined with the new "tempo mapping" features, Mixbus is well-suited to mixing live multi-track band recordings.

A comprehensive redesign of keyboard shortcuts, preferences, and window-management makes Mixbus more friendly to users of other DAWs.

VST Plugins on Mac
Mixbus can now load VST plugins on Mac (in addition to AU and LV2), allowing for better Mac-to-Windows-to-Linux sharing of sessions. Visit Preferences->Plugins to scan for your installed VST plugins. The plugin's format will be displayed in the right-click context menus, as well as the plugin manager window.

Tempo Mapping
Following a comprehensive redesign of tempo and meter conventions, Mixbus allows the user to elegantly add tempo markers on a live show; and when desired, the tempo can smoothly ramp to follow natural tempo changes. An elegant method of editing allows you to drag the "measure lines" directly behind your transients. You don't really think about the tempo itself; just line up the measure-lines with your performance and Mixbus does the hard work for you.

Mapping the mixbus timeline to your performance can dramatically speed-up your editing and mixing process without robbing a performance of its natural timing. For example, once you've mapped a guitar-vocal recording, you can drag&drop MIDI (or a virtual drummer) into your session, and they will follow the natural tempo changes in the music. Watch this video for more details: YouTube.com/watch?v=rrr9lr_Pbkg

Inline Plugin Displays:
Mixbus v4 supports a new feature of the LV2 plug specification: Inline Displays. Harrison are often asked why they chose the LV2 format for their plugins, and this new feature is an example of the innovations that they will be able to implement with the new open-source format. 5 example plugins are provided that utilize this new feature: a-EQ, a-Filter, a-Compressor, a-Inline Scope and a-Inline Spectrogram.

Lua Scripting
A comprehensive new scripting engine has been added which allows users to write simple scripts to modify their sessions. A Lua script can trigger a sequence of keyboard actions.

Some of the many included example scripts:

Your Lua scripts may be triggered from keyboard shortcuts or the Toolbar. You can write your own DSP or MIDI processing plugins as Lua scripts. They can even display their own icons.

Mixbus32C v4 is available for $299. The Harrison website has been updated with a new Specials page, so you can always find their best offers in one place. If you are a previous Mixbus32C customer, you should receive an update offer via email.

"You might have noticed that Mixbus's development is accelerating quickly. This is largely due to the rapidly increasing open-source community that we are encouraging. Over the last year, Harrison has worked to lower the barrier to entry for developing the Ardour platform so more developers can take part in the process. The new Lua scripting features are also a new opportunity for users and casual developers to take part in the development of Mixbus."

"Continuing our collaboration with the Ardour open-source community, Mixbus v4 is session-file compatible with other Ardour-using workstations: Ardour5, Waves Tracks Live, and the newly-announced iZ Session. This level of inter-application support is largely due to Harrison's continued funding and support of open-source development."

"And speaking of inter-application support, you'll find something very interesting in the v4.0 release: .ptf and .ptx file import. This new item in the "Session" menu allows you to select a Pro Tools session file, and import the raw audio and MIDI data. This is a "Beta" feature that was developed by a member of the open-source community, and has limited functionality. It is provided for adventurous beta-testers only, to help us develop it further.) "