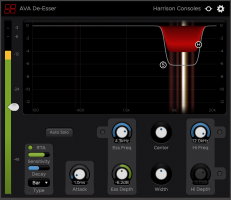 LegacyQ: The RTA Analyzer has a new "scroll" selection which provides a scrolling spectrogram of your sound. You can use the scrolling display to identify drum hits, find the perfect cutoff frequency for your vocals, or minimize finger squeaks. LegacyQ also has a new "Output Trim" knob.

AVA De-Esser: The AVA De-Esser has a "scroll" feature just like the LegacyQ, but it also has a new "bar" analyzer which helps you identify and eliminate harsh sibilance:

AVA Mastering EQ: The AVA Mastering EQ's RTA has 3 display modes: Graph, Scroll, and "Lightning". Lightning Mode is an innovative new display method that shows an averaged value for the RTA curve, and it simultaneously shows the peaks in your signal with brighter, bolder sections of the curve.