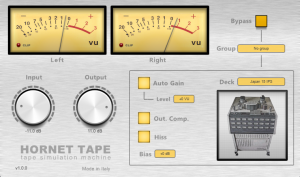 HoRNet has released Tape, a plug-in simulation of the effect that magnetic tape applies to the signal recorded on it.

What Tape does is to apply the distinct saturation of analog tape to your tracks and also adds the specific frequency response of four different popular tape machines, each at two different speeds, 15 or 30 inch per second.

HoRNet Tape allows you also to change the bias applied to the tape changing the saturation characteristics and allowing you to increase the effect.

The tape deck emulation includes both the typical frequency response given by the playback head and the internal electronics saturation.

HoRNet gave Tape the ability to automatically set its input gain thanks to their Auto Gain technology, and help you target your "recording level" more easily allowing you to choose between +1, +2 or +3 VU. Constant level monitoring is provided by the output compensation feature that will let you judge the effect without being fooled by loudness changes.

HoRNet also added a grouping feature that will let you automatically copy some of the settings (like the deck type, the target input level, bypass, etc.) to every instance of the plugin set to the same group. Up to 8 groups are available.

HoRNet Tape is available for 19.99 € on www.hornetplugins.com