HoRNet Tape by HoRNet is a Virtual Effect Audio Plugin. It functions as a VST Plugin, an Audio Units Plugin, a VST 3 Plugin and an AAX Plugin. 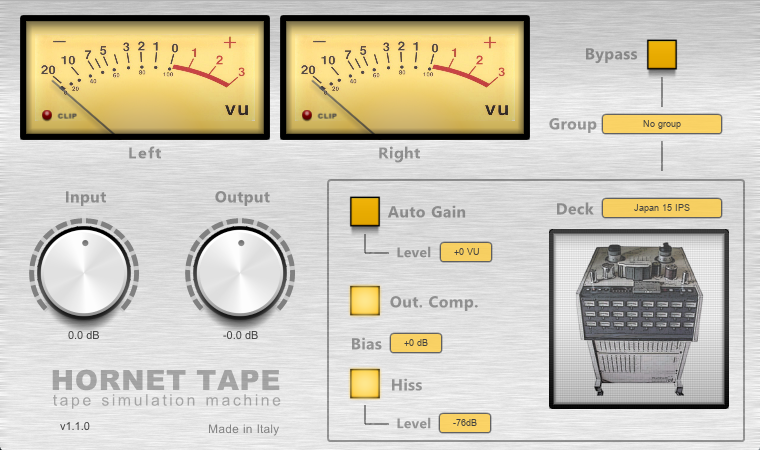 HoRNet Tape is a simulation of the effect that magnetic tape apply to the signal recorded on it.

Tape was the recording medium of choice before digital took its place in the early 90s and has s distinct effect that helped to define the sound of the music of the 60s, 70s, and 80s.

What Tape does is to apply the distinct saturation of tape to your tracks and also adds the specific frequency response of four different popular tape machines, each at two different speed, 15 or 30 inch per second.

Tape saturation acts differently on high and low frequency, saturating much faster at high frequencies and giving drums and vocals that peculiar "shhh" sound, low frequencies are made thicker and gain weight, this combined with the non-linear frequency response of tape decks creates the classic vintage sound.

HoRNet Tape allows you also to change the bias applied to the tape changing the saturation characteristics and allowing you to increase the effect.

The tape deck emulation includes both the typical frequency response given by the playback head and the internal electronics saturation, the frequency response alteration affects mainly the low part of the spectrum and is shifted up increasing the tape speed from 15 IPS to 30 IPS.

We gave Tape the ability to automatically set its input gain thanks to our Auto Gain technology and help you target your "recording level" more easily allowing you to choose between +1, +2 or +3 VU, constant level monitoring is provided by the output compensation feature that will let you judge the effect without being fooled by loudness changes.

Since a plugin like this that is meant to go on every track is only useful if you can judge it's effect on the complete mix we have added a grouping feature that will let you automatically copy some of the settings (like the deck type, the target input level, bypass, etc.) to every instance of the plugin set to the same group. Up to 8 groups are available.