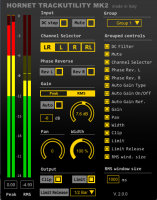 The 2.0.4 update is a maintenance release and includes:

The update is free for current owners of the plugin and can be downloaded from the user area on www.hornetplugins.com