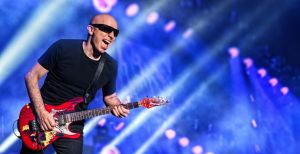 Offering instant access to playing, practicing, and recording, this software offers precise models of amps and pedals that have shaped his sound for many years. With signature sounds and presets from guitar legend Joe Satriani, this new software is a must-have for all guitar lovers.

Also included are song presets covering Satriani's discography that allow you to dial up your favorite Joe Satriani tones for instant inspiration.

AmpliTube Joe Satriani (for Mac/PC) is available at the IK Multimedia online store and from IK authorized dealers worldwide for $/€99.99*.

The Joe Satriani Collection (iPhone and iPad) is available via in-app purchase from within AmpliTube CS for iPhone or iPad for $/€24.99*. Individual models may also be purchased a la carte.