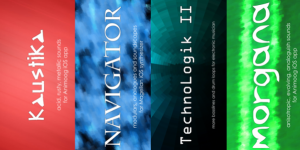 TechnoLogik Free Loops: 10 basslines and drum loops for the electronic musician. It contains different loops from the ones in TechnoLogik II (16-bit/44.1kHz WAV format).

All these sounds, and 20 more, are already available for all Kreativ Sound members. Premium membership price was now lowered to only $9 per year.

AnimoogSynth
by Moog Music $29.99
Add A Review My KVR