With the KVR Developer Challenge 2021 at the download and voting stage it's time to focus on each of the 37 entries that are available now, for free, for everyone. 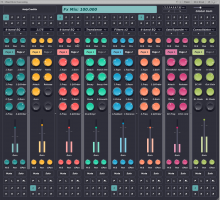 This plugin, originally intended to be used in REAPER, started as a mixer for audio buses on the same track. Additionally it gained a FX slot for every track with the intent of e.g. filtering reverb returns while keeping the amount of FX on the DAW's mixer low. At the end I made it semi-modular so it can act as a multifx.

The plugin has 8 stereo buses in and out. It has 8 mixer channels too. Any of them can take any combination (sum) of the 8 plugin input buses and output it to any combination of its 8 plugin output buses.

On top of that the 8 mixers can be divided on groups of 4 and 2 buses connected in series, with the equivalent effect as if two or four instances of the plugin were loaded on the host in series (with the reduced number of buses). This allows FX chains with paths in series and parallel, while not being fully modular (and with no wires).

Each mixer channel has:

A C++ port of some popular Reaper Jesusonic FX.

The interface is plain vanilla vector-based JUCE. It is pretty feature packed vertically. It doesn't look so nice on laptops.

This is tested only on REAPER, mainly on Linux but sanity checked on Windows.

The code should compile on Mac with minimal modifications, but I'm not a Mac user.

I compile an LV2 version too. (Untested, not an LV2 user myself). It can be found on the build artifacts on the main repo.

For a reference of which FX includes, better to browse on Github: github.com/RafaGago/artv-audio/tree/master/src/mix-maxtrix

MixMaxTrixMixer
by ArtV   Free
Add A Review My KVR