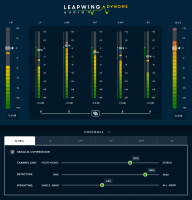 Leapwing Audio has announced the release of DynOne, a unique multiband parallel compressor designed from the ground up, using "very gentle and great sounding" linear phase crossover filters. Its design allows you to mix in compressed filter bands with the original signal. This makes it possible to shape and tonalize your sound without squashing its dynamics.

DynOne has four unique features. You can set minimum and maximum attack and release values for an adaptive compression timing which is dependent on the crest factor, making it sound musical. There is also a slider to set the envelope detection circuit to RMS or peak, or anything in between. And multi-mono to stereo variable channel linking. The last unique feature is that the sidechain input of each band is defined by a variable weighted mix of that particular band versus the other adjacent bands; one weighting slider gives you intuitive control over the sidechain inputs.

All of these features are available in an intuitive interface. It allows you to tonalize your sound and fatten it up, all within seconds.

Find DynOne in the KVR Marketplace