Mokafix Audio has announced a new series of six distortion stomp-box emulations just a few weeks after the release of its first batch of seven fuzz and distortion effects. These new plug-ins will be available as Windows VST effects and will cover a range of vintage distortion and overdrive tones. 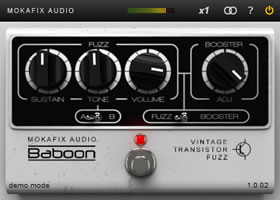 Each effect is based on the original effect schematics and features all the processes of the original circuit (DC filtering, gain stages, clippers, tone filtering). They have then all been fine tuned with specific audio material to match the tone and dynamic response of the real stomp-boxes in order to guarantee a faithful reproduction of the original tones and realistic analogue behaviour.

The release date is scheduled for the end of February. Pricing has not yet been announced.