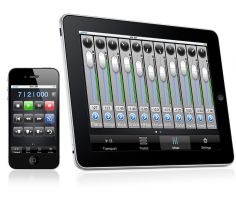 DP Control is now available as a free download from the Apple App store. It is compatible with any iPhone, iPad, and third-generation iPod Touch, and it requires Digital Performer 7.2 or later running on a Mac on the same WiFi network as DP Control.