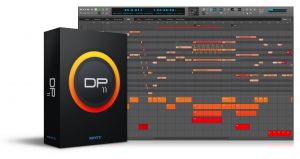 Articulation Maps
With DP's new Articulation Maps feature, users can take full control of the expressive depth of today's most advanced orchestral sound libraries, including VSL, East West, Spitfire, Cinesamples and many others. Users can create or import articulation maps to build dynamic instruments and ensembles, allowing them to play, record or program expressive performances with "unprecedented realism and musical impact".

Each articulation can be mapped to a symbol, stem ornament, alternate notehead or custom text (such as con sordino) in DP's QuickScribe notation editor. Symbols remain connected to their orchestra library sounds, so that what you see is what you hear. Because notes remember their symbol, users can instantly switch maps at any time (to a different sound library, for example). In addition, each articulation can trigger multiple forms of output, from on-velocity changes to note stacks, providing support for even the most advanced orchestra libraries, such as the VSL Synchron engine. DP's Graphic Editor provides clear, intuitive editing of articulations in separate lanes.

Support for MIDI Polyphonic Expression (MPE) and Per-Note CCs
In DP 11, users can record multi-channel output from an MPE controller — such as a Roli Seaboard — as regular MIDI notes with encapsulated MPE expression data. After recording a range of gestures (strike, pressure, slide, glide and lift), users see a single stream of normal MIDI notes each containing their own note-specific controllers (generated by the performance) superimposed on top of each note for easy and intuitive editing in DP's familiar piano roll. Or users can view and edit each controller in a separate lane using DP's familiar and powerful continuous controller (CC) editing tools. A new Scale tool allows users to increase or reduce the amount of expression by dragging up or down. MX4 and DP's other included synth plug-ins are MPE-enabled, so users can get started with their MPE controller right away.

Audio Retrospective Record
DP11 adds audio to its Retrospective Recording capabilities. Now, DP always listens to both MIDI and audio input sources, capturing everything, even when not recording. Like magic, users can immediately recall any audio or MIDI material they've recently played. For both MIDI and audio input, Digital Performer ensures that you'll never lose that precious, fleeting creative moment.

Nanosampler 2.0
This major upgrade of Nanosampler serves as every DP user's go-to virtual instrument for creating unique beats, instruments and sounds. Drop in a sample and start stretching, slicing, randomizing and transforming audio into just about any sound or instrument you can imagine. New features include: three playback modes (Classic, 1-shot and Slice), ZTX time stretching, beat slicing with Randomize and Auto Randomize, Repeat, Reverse, and a ground-up rewrite of the UI.

Clip Triggering With Novation and Akai Pad Controllers
Gain complete hands-on control of DP's extensive Clips window with popular pad controllers like the Novation Launchpad Pro mk3 or Akai APC-40. Trigger individual clips or entire scenes (sections of songs). Apply filter sweeps and other effects processing as you go: Digital Performer is now a powerhouse live performance platform that can take your shows wherever you can imagine.

Enhanced Avid EuCon Support
DP's EuCon plug-in has been substantially updated, including support for the Avid S6 console. In addition, you can now use a EuCon-compatible worksurface with DP running on Windows 10.

Users of competing products can purchase the DP11 Competitive Upgrade from motu.com or from any authorized MOTU reseller.