Native Instruments has announced Kontakt 4, a new version of the software sampler that takes its performance and versatility for music production, live performance and sound design even further. The fourth generation of Kontakt adds powerful "Authentic Expression Technology," unique sample compression, an extended studio-grade sound library complete with a convenient new database system and much more. 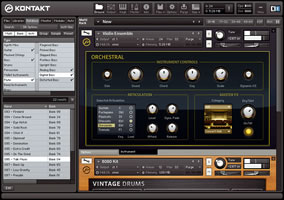 Already based on a versatile sampler engine, Kontakt 4 establishes the next level in sampling with the addition of exclusive new Authentic Expression Technology (AET). With AET, the dynamic tonal behaviour of original instruments can be replicated in new and highly expressive ways. The technology enables the seamless transformation between the spectral characteristics of different sounds, achieved via a phase-corrected convolution technique based on FFT analysis of the original sample. AET avoids the typical shortcomings of conventional velocity layer techniques, and gives additional realism to sampled instruments like strings, brass, woodwinds and choirs. AET also makes it possible to combine and blend the spectral characteristics of any set of sounds in real time, opening up vast new possibilities for creative sound design.

Kontakt 4 also overcomes existing performance barriers through a unique sample compression technology that allows musicians and producers to get substantially more out of their setups. Specifically developed for Kontakt, the new NCW compression format reduces sample size by up to 50 percent. During playback in Kontakt 4, the sample material is decompressed to its exact original format with minimal CPU load, and without any loss in audio fidelity. This substantially widens the typical performance bottleneck of today's computer systems, and results in profound performance gains for complex multi-timbral arrangements and high-polyphony instruments.

The sound library of Kontakt has been enhanced and expanded once again in its fourth revision. A major addition is a full-featured chamber choir collection, recorded exclusively for Kontakt 4 and equipped with AET-based vowel morphing controls. Further additions include solo strings and a concert organ from the VSL library, as well as a painstakingly sampled Mellotron that complements the extensive "Vintage" collection in the Kontakt factory library. A new professional impulse response library also expands the value of the powerful convolution effect integrated in Kontakt. Now at 44 GB, the Kontakt 4 factory library provides a comprehensive arsenal of acoustic and synthetic instruments for all areas of professional composition and music production.

To utilize the Kontakt library in the most efficient way, Kontakt 4 also introduces a new sound browser with greatly enhanced convenience. Users can search for instruments, multis, samples and even effect presets based on clear musical attributes, making it easy to find the right material for any application and context. Drag-and-Drop assignment and support for custom attributes allow to easily manage even the most diverse sound collections, and get the most out of the range of Kontakt-compatible instrument content on the market.

More information on Kontakt 4 including audio and video demos can be found here.