Nomad Factory has released of Echoes, an Analog Echo Box plug-in designed to reproduce the warmth and richness of classic vintage delay effects. Echoes faithfully models the greatest delay units of all time. 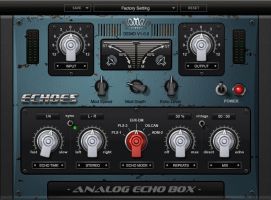 Following the philosophy behind Nomad Factory’s Magnetic plug-in, Echoes is designed to be very easy to use. Echoes has captured the essence of the original effects by keeping it simple. With the turn of a few knobs, the plug-in delivers musical results and instant analog delay satisfaction.