Prodyon has announced Livemachine, which is described as a unique "realtime looping sequencer" that can be used to create songs, remixes and loops on the fly. With Livemachine you can record audio, loops and drum sounds in realtime then mangle them using the huge library of onboard effects, like reverb, slicer, grainer, pitcher and much more. 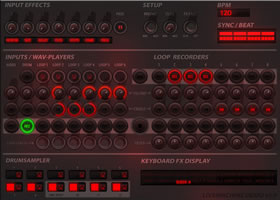 Livemachine is currently in the final steps of beta-testing and will be released on December 6th, 2009, for Windows in VST effect and stand-alone versions. A Demo version will be released soon. The final price will be $99 for just the plug-in and $129 for the set with a 2GB sample-library. Until its release Livemachine can be pre-ordered for $65.