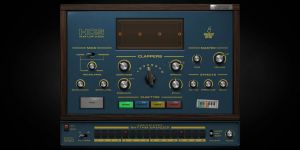 Claps and snaps are used in most music productions today. Whether you want soft and dry finger snaps for your delicate acoustic song, or hard hitting claps drenched in reverb for your trap track, Hand Clap Studio has you covered with just a few tweaks of the controls.

The samples were recorded in the renowned Atlantis studio in Stockholm using a professional percussionist and an in-house sound engineer. Multiple microphones were used to capture the close sound (ribbon and condenser), the room sound (stereo pair), as well as the echo chamber at Atlantis. 4 clapping styles were recorded at 5 different velocities, with 13 round robins for each. The instrument contains a total of over 700 samples.

Apart from mic selection and levels, you can control the number of clappers, their spread in the stereo image, and the looseness of their timing according to a customized statistical algorithm. Hand Clap Studio also includes some basic effects to help the sound cut through the mix, including a tilt EQ, a presence control and a compressor.

It also has an on-board 2 pattern programmable step sequencer with a slide control to adjust the timing in relation to the song. It supports MIDI export via drag and drop, including directly to the timeline of the host DAW.

Hand Clap Studio retails at 59 Euros and can be bought directly from Robotic Bean's website.