Tony Franklin Fretless Bass Grooves Vol. 1 is an original groove library from rock bass legend, Tony Franklin. Tony has developed his signature fretless bass style playing with such major artists as The Firm, Blue Murder, Whitesnake, David Gilmour, Kenny Wayne Shepherd and many others. Now you can get Tony's timeless grooves and stylized tone onto your tracks for less than the price of a single hour of pro studio time. Tony Franklin Fretless Bass Grooves Vol. 1 contains 12 "songs," each containing 13-19 sections such as Intro, Verse, Chorus, Solo, Ride Out, etc. There are 184 unique loops in total provided as both amped and direct tracks.

Tony Franklin Fretless Bass Grooves Vol. 1 includes 3 different file formats so you can drop Tony's tracks into any production or just turn it on and start jamming along immediately. First, you get the complete songs played start to finish -- both with and without a click track -- as standard WAV files so you can start jamming with Tony immediately. Next, you get each section of the song as a perfectly looping WAV file that you can drop right into your DAW or sampler so you can assemble your own song using the sections in any order you want. And then last but certainly not least, we have created beat-sliced files in Rex2 and Stylus RMX format to give you total control over tempo in your DAW, sampler or groove creation software. Between all the provided formats, the product contains over 1,500 files in total. 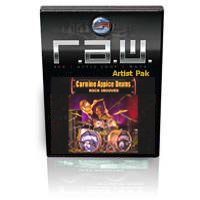 Carmine Appice Rock Grooves is an Artist Pak groove library featuring legendary rock drummer Carmine Appice. Carmine has played drums with countless artists ranging from his band Vanilla Fudge to Jeff Beck, Ozzy Osbourne, Rod Stewart, Pink Floyd, Blue Murder, Edgar Winter and more. In this collection you get over 900 rock solid grooves performed by Carmine and offered in three popular groove formats, Rex, Apple Loops and Wave. Mix and match flexible tempo grooves and fills to create your own virtual session with Carmine Appice in your music. Whether you use Pro Tools, Logic, GarageBand, Cubase, Live, Reason or any DAW or sampler, these grooves are designed to make it easy to have top studio quality drums for your music. The perfect companion to upcoming Sonic Reality libraries with other artists such as Carmine's brother, legendary rock drummer Vinny Appice. 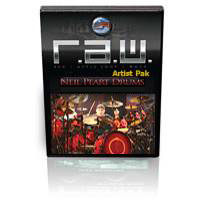 As a follow up to Sonic Reality's Neil Peart Drums Vol. 1 The Kit and Neil Peart Drums Vol. 2 The Grooves (now dubbed "Modern Grooves), Vol 3 Classic Grooves features previously unreleased Rex, Apple Loops and Wave drum grooves performed by Neil Peart, the legendary drummer of the band Rush. The sessions were recorded by producer Nick Raskulinecz (Rush, Foo Fighters, Alice In Chains). This title focuses on the hard rock grooves of Rush in the style of classic albums like "Permanent Waves", "Moving Pictures", "Signals" and more. Over 800 groove patterns to work with in any combination with flexible tempos so they can fit into any style of music you re working on. It's like having Neil Peart play drums on your songs. Neil Peart Drums R.A.W. Artist Packs are the ultimate collections of album quality stereo mixed drums for your music. A perfect companion to Vol 2 Modern Grooves and Vol 1 The Kit.