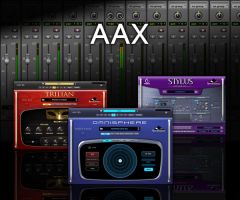 Registered users of the Spectrasonics instruments can log into their user accounts to download the Public Beta versions. The new versions are available at no charge to registered users to test with the new 64-bit version of Pro Tools. Omnisphere, Trilian and Stylus RMX are all native 64-bit software instruments designed to work with Pro Tools 11 on both OS X and Windows.

The Omnisphere Power Synth is Spectrasonics' flagship instrument featuring a hybrid architecture of high-resolution streaming samples as well as an extensive, fully programmable semi-modular synthesizer, which can be combined for thick, layered patches. Omnisphere ships with over 8,000 sounds.

The Trilian Total Bass Module instrument is built on the same STEAM Engine technology as Omnisphere with immense flexibility in programming, while offering a vast selection of patches for Acoustic, Electric and Synth Basses.