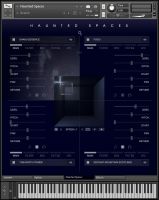 Soniccouture has announced the release of Haunted Spaces, a Cinematic Atmosphere Instrument for Kontakt Player featuring:

The idea that certain places take on the weight of past events is familiar to all of us. Renowned field recordist Chris Watson has spent years collecting audio recordings from such places in one of his most personal projects.

Biggest beginner strugglesby Moe Shinola @ 4:06 in Getting Started (AKA What is the best...?)

I know what preamps do, but when would you use them?by Moe Shinola @ 4:02 in Getting Started (AKA What is the best...?)Empirical Labs Big FrEQby ericbridenbaker @ 3:56 in EffectsGrainSpace updated to v2.1 - Granular Reverb Processor - VST2/VST3/AU/AAXby rj0 @ 3:55 in EffectsView All Latest Posts