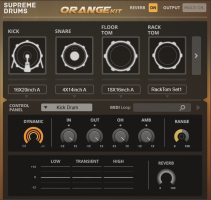 Supreme Drums is made using a completely different approach known as Hybrid Modeling, which is a combination of modeling and sampling. This will not only cost less resources, but also give more freedom on usages and sounds. Supreme Drums Orange has 27GB uncompressed original sample data, but after the modeling, it reduces to a small size – 800MB, which is only 3% of the sample size, while keeping the same sound quality. Also, the RAM usages are much smaller than sample libraries. This leaves more resources for other plugins when you need a drum in a big project.

With AI technology, we are able to combine EQ, dynamic processing and transient designer into only three easy-to-understand controls. This effect can make an effective change in sound on the fly without the need for vast professional knowledge to carry out the operation.