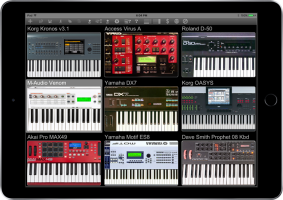 Sound Quest has announced that MIDI Quest, the multi-instrument SysEx editor/librarian, is now available on the iPad for free.

MIDI Quest supports over 630 of the most popular MIDI instruments and other devices from over 50 different manufacturers including Korg, Roland, Yamaha, Kurzweil, Alesis, Waldorf, Kawai, Akai, and E-mu.

Store, organize, and edit banks and the individual patches, combinations, multis, performances, drums settings, and other SysEx loaded from your MIDI hardware. MIDI Quest is a true multi-instrument editor/librarian designed from the ground up to effectively support multiple MIDI ports, multiple manufacturers, and multiple MIDI devices.

MIDI Quest "talks" to each MIDI device individually so it can simultaneously send SysEx to as many as 250 different instruments and still edit another instrument - all at the same time.

MIDI Quest is not a panel editor. MIDI Quest is an integrated system capable of fully managing, editing, and organizing the simplest to the most complex workstation class MIDI devices and hardware synthesizers such as Korg's flagship workstation, the Kronos.

MIDI Quest natively reads and writes industry standard .syx and .mid files so that you can easily take advantage of SysEx downloaded from the internet or received from a friend.

MIDI Quest for iPad imports Set, Collection, individual Patch, and individual Bank files from Mac and Windows versions of MIDI Quest so existing SysEx can easily be stored and edited on an iPad.

MIDI Quest can store an entire studio configuration - in a single file.