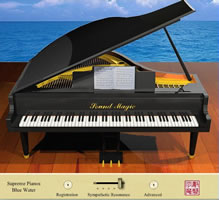 Supreme Pianos uses physical modeling technology designed to achieve the same reality level as sampling while keeping the CPU usage low. In order to do this, Supreme Pianos uses a series of technologies that Sound Magic describes as "groundbreaking", including Harmony Rendering Engine and Multi-Dimension Vector Synthesis.

The basic idea of Supreme Pianos comes from 3D graphic rendering. It uses Physical modeling to shape the sound's "skeleton" of the piano, and then maps a series of harmony components on to the skeleton to achieve an authentic sound.

Supreme Pianos does not rely on sampling, has a small memory footprint and low CPU usage making it ideal for live performances. Even on a Pentium III 533MHz system, it could work great while running under heavy duty. And on today's quad core system, Supreme Pianos could maintain CPU usage unnoticeable, according to Sound Magic.

With an introductory price of €199, Supreme Pianos is available now in stand-alone and VST instrument plug-in formats for Windows. There will be more add-ons in the feature. A demo version is available.