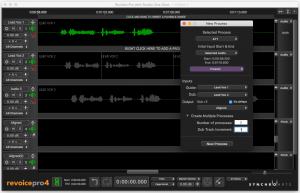 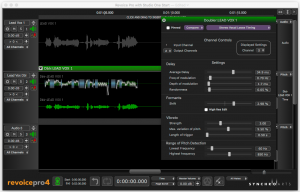 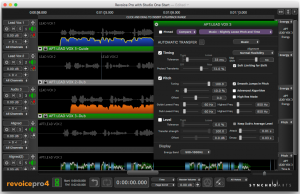 Synchro Arts has announced the release of Revoice Pro 4, a major new version of the toolbox for timing and pitch adjustment offering new features and improvements including much improved handling of musical vibrato, the new APT Music and Dialog modes, numerous graphic and workflow improvements, ARA 2 support and cloud based licensing.

Revoice Pro 4 includes over 70 new features and improvements. Highlights include the new Vibrato Warp function, which intelligently identifies the singer's vibrato characteristics, and retains them—even when time stretching or compressing their voice. With other time-modifying applications, the vibrato speeds up or down when the length of a part is altered. The unique Audio Performance Transfer has been further refined, and users can choose between APT Music and Dialog modes depending on the task at hand, for even better results when aligning the pitch, time or level of one track to another. Numerous graphic and workflow improvements, such as user-definable key commands, have also been implemented. Revoice Pro is now ARA 2 compatible, which means significantly improved integration with ARA 2-ready DAWs. And last but not least, Revoice Pro 4 users now have the choice to use iLok Cloud based licensing for authorization, meaning there's no need for an iLok USB Key to run or try the application.

The introductory period ends October 17, 2018, after which the normal prices will apply. All prices below exclude sales tax/VAT: