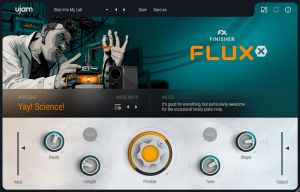 German-American plug-in makers ujam has announced the release of Finisher Fluxx, the the company's third addition to their series of virtual multi-effects, saying:

You may call this plug-in the evil genius of creative FX. It's designed to bring dead sounds back to life.

The Finisher concept combines a handful of macro controls controlling 50 different complex multi-effect chains (called Modes) under the hood. It features 4 individual macro controls per Mode, each controlling a separate sound aspect, making Fluxx a tool for sound designers and music producers to deconstruct, transform and animate their sounds.

Finisher Fluxx is immediately available in VST, AU, AAX plug-in formats for both macOS and Windows at ujam.com for an introductory offer of 69 EUR / USD until November 1st, 2020. After that, the plug-in sells for 99 EUR / USD.

The Bundle of three Finishers including Fluxx, Voodoo and Neo is available for 199 EUR / USD (instead of 297 EUR / USD for the single products).

Owners of the Finisher Bundle, Neo and Voodoo are offered a special loyalty price of 49 EUR / USD during the introduction period ending November 1st, 2020.