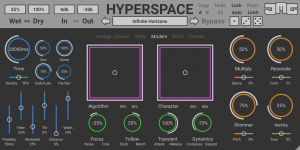 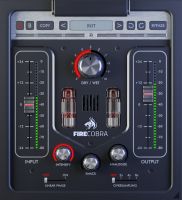 Hyperspace is an algorithmic reverb allowing the user to create algorithms made up of various processors. Vintage, Classic, Retro, Modern, Sci-Fi and Cosmic modes let you combine various algorithms with endless possibilities. HyperSpace will enrich your tracks with myriads of colours.

FireCobra combines the accuracy of the digital world with the live randomness of the analogue. Behind its simple user interface, there's more technology than you'd expect. FireCobra intelligently analyses the audio signal and makes it sound punchier, more powerful and better in general. It makes the mixes better with nearly no time wasted on setting it up. Just put it on every track you'd like to enhance and set how much. Quick and easy and sounds... Well, you decide.

Inspired a model of the classic British device from the Beatles era used on hundreds of record since the sixties Royal Compressor delivers true vintage analogue sound and feel. Pleasant saturation and sensitive compression is something every track really needs.

Intro Offer: All three plugins are currently available with a 40% introductory discount, â‚¬77 each instead of â‚¬129. All the plugins are provided with fully working unlimited 15-days trial versions.

Who are the United Plugins?
"United Plugins is a federation of small, independent development teams comprised of individuals involved in the music industry. Indeed, the founding triad of FireSonic, JMG Music, and SounDevice Digital can count engineers, producers, and artists amongst their 'united' names. Needless to say, all were seeking the freedom to create the tools that they would like to use in their studios and on their projects. And all agreed that this could be better achieved by working together. Though United Plugins' proliferating product portfolio may not necessarily be for the musical masses, surely someone, somewhere will always find those tools to be a nice fit for their own music productions â€” just like those inventive individuals forming United Plugins' founding independent developer triad."

Find FireCobra by FireSonic, Hyperspace by JMG Sound and Royal Compressor by Soundevice Digital in the KVR Marketplace