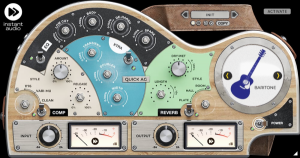 UnitedPlugins has released a new version (2.3) of their QuickAG plugin. This all-in-one acoustic guitar solution includes a compressor, EQ, saturator and doubler. They say:

The main change in this version is the way the plugin acts after the 15-days fully working trial version expires. Instead of generating noises, the plugin remains fully functional (soundwise).

QuickAG 2.3 turns into a free second-hand version and only loses the chance to tweak some of the parameters. But you can take the advantage of using a mighty free plugin. Presets made with a full version remain functional in the free version.

To get it, download the QuickAG trial version and let it expire. No activation or registration is needed.

All UnitedPlugins effects including the full version of QuickAG are at 50% of their regular price until the end of the month.