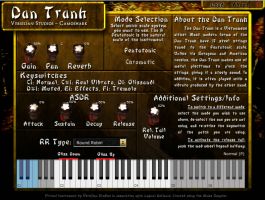 The Dan Tranh is a traditional zither originating from Vietnam. It is considerably longer than its European and American cousins, and is also tuned as a pentatonic instrument.

Dan Tranh comes in the form of either a 32-bit or 64-bit VSTi plug-in or an Audio Unit component.