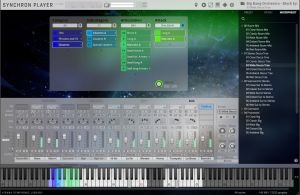 At this year's Winter NAMM show the Austrian company presents their anthology of library and software products, focusing on a slate of products that were released during the last two months, among them Big Bang Orchestra. Following Big Bang Orchestra: Andromeda, the second tutti orchestra expansion pack, Big Bang Orchestra: Black Eye, was released just in time for NAMM. The presentations are hosted by Vienna Symphonic Library's American distributor, ILIO, at booth #11910 in Hall A of the Anaheim Convention Center.

From rhythmic textures to floating spheres
Hundreds of tension-charged clusters are available in several dynamic levels, short and long, with and without marcato, and as short and long crescendos. Sustained textures are grouped in several categories, some either slightly changing in pitch (microtuning) or gravitating slowly toward the root note (or vice versa). Others don't change in pitch, but in volume, with different sections of the orchestra alternating their volume resulting in a sustained tone that's constantly changing its colors.

Dramatic Accents
A special effect for dramatic accents is provided by the "Graced" patch, in which the instruments of the high register rip towards a target note, which is reinforced by the rest of the orchestra with a powerful marcato-staccato. The "staccato-sordino sustains" provide a special spine-tingling sensation – while the fortississimo staccato of brass and low strings rings out, a very soft high note played by the muted strings remains, illustrating the dynamic range of the orchestra in a split second. The Echoes and the Register Delay patches add even more variety to the category of Hits.

What's more, Big Bang Orchestra: Black Eye provides a wide range of "classic" orchestra hits with all major, minor, open and diminished chords, octave grace notes, octave trills, a variety of short rips as well as longer major and minor runs in breathtaking tempos, where especially the instruments of the lowest register were deliberately pushed to their limits.