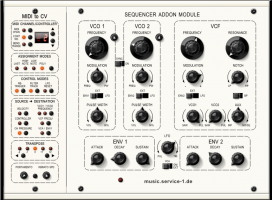 While the soundwise construction is similar to the hardware unit, some limitations have been eliminated in the software version; so there is polyphony, a second LFO, a noise source and PWM for the saw waveform. Special attention was given to recreate the analog variably of separate hardware circuits for the audio paths in polyphonic mode.

SAM will be available at the end of August 2011 as a VST instrument plug-in for Windows with an introductory offer.