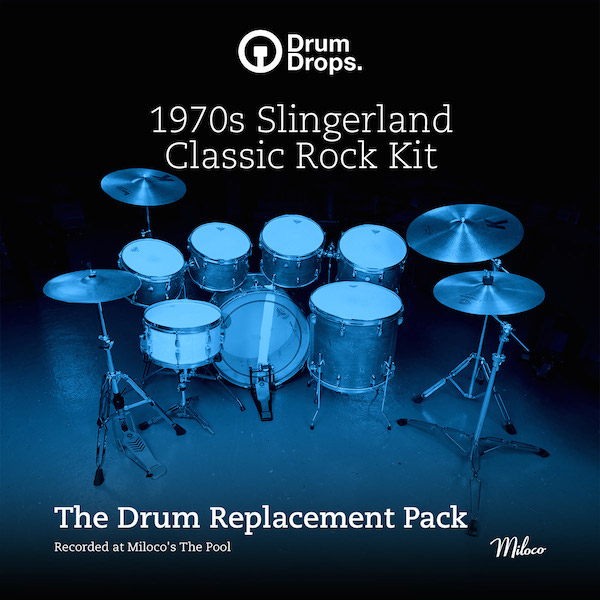 The 1970s Slingerland Classic Rock Kit - Drum Replacement Pack as mixed by Alan Moulder comes with patches for Slate Trigger V2, Drumagog 5 and DrumXchanger. If you use any of these pieces of software and want a classic 70s rock kit as mixed by one of todays leading alternative rock mix engineers then look no further.

The recording took place in Miloco's The Pool Studios in London. At the centre of the Control Room can be found a rare vintage EMT console. The outboard racks are full of great gear with highlights including Neve 1079's and 1272's, API Mic Pre's and Telefunken V76's. Compressors include Urei 1176's, Altec, Neve 2254's and Tweed. Mics used include Neumann U87's, Coles 4038's, AEA R88 MkII Ribbon Mics, Neumann Gefell CMV 563's, Earthworks SR30's, a Lomo 19A19 and AKG mics. Alan Moulder mixed the kit in his studio Assault & Battery 1 in London. Based in the famous Battery complex in North London this is a mix room centered around a pristine 72 channel SSL G+ SL4000 once owned by Trent Reznor. Add to this the huge collection of outboard an HD3 protools rig fully loaded with plug-ins and you have an extremely impressive mix room.

The Slate Trigger patch patch has been created using the close mic, overhead and room mic samples from the kit. There are samples for the kick drum, snare and toms. The samples in this patch have up to 16 velocity levels and six round robins totalling 3280 samples. The samples come in the tci format.

The Drumagog patch uses the same samples and you can choose the balance between the close mic, overheads and room mics. This patch uses up to 8 velocity levels with four round robins totalling 1344 samples. We have included samples for the Kick, snare, toms and hi-hat. If your version of Drumagog contains the Auto hi-hat tracking feature then the samples will follow the opening and closing of the hi-hat. The samples come in the gog format.

The DrumXchanger patch contains stereo mixed samples (a combination of the overhead, room and close mics samples). This patch contains eight velocity levels with no round robins totalling 82 samples. The snares also contain a rimshot sample that have their own adjustable trigger threshold. The samples come in the splx format.

The Drum Replacement Pack of the Alan Moulder mixed 1970s Slingerland Classic Rock Kit is available exclusively from the Drumdrops store for £ 12.50. Head over here to find out more.

Audiaire Expansion Pack Sale: Take 30% off of all expansion packs