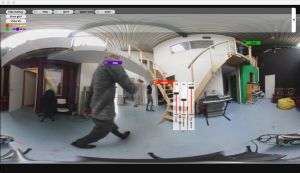 360pan suite is a plug-in suite for Windows and macOS designed to deliver up to third order ambisonics mixes for immersive audio: audio from all directions, intended for headphone reproduction, that stays where it is even when you turn your head.

You can do all your panning, distancing and even mixing from within the video window of your DAW (Reaper or Pro Tools HD/Ultimate). There is no need to have any plug-in interfaces open while working.

Gain, distance and reverb width, along with the puck itself will show up in the (Pro Tools HD/Ultimate) video window when a panner is inserted and 'show puck' and 'show overlay' are switched on. The three sliders appear when you click the three slider icon that shows when you hover the mouse over a puck in the video window.

It is possible to use the 360reverb in a traditional way using sends and busses, however it is designed to be used in a more clever way:

mono or stereo sources are converted up to ambisonics, while giving it a left-right, up-down, and distance position in the ambisonics bus. A panner is inserted on each sound source track to do this. So panners get mono or stereo (or even 4channels) of input and output ambisonics.

Each 360reverb creates a private ambisonics input, kind of a backdoor, only accessible by the 360pan instances. Each 360reverb shows up as a send destination in each 360panner. This ties the 360pan's to the reverb in such away that you can adjust distance and reverb-width per panned source. This goes for an unlimited amount of sources even if there is only a single 360reverb in your project (which is the most usual setup).

Besides all this the usual main input of the reverb still functions (also simultaneously with the private input).

The 360pan suite of plug-ins is protected using a single license. An iLok (second or third generation) USB key can be used however this is not required: the license can also be activated on a machine (computer) using the ilok license manager application. A free ilok.com account is required for this.

There are a lot of names for the type video that the 360pan suite can deliver this spatial (or localized, immersive, 3D) audio for:

These type videos require a soundtrack that can turn when the head of the viewer with VR goggles, head-mounted-device (HMD) on, or his phone, is turned.

There are a number of playback platforms for 360 VR videos:

All of these chose Ambisonics as the technology that allows for the interactively turning audio mix. This means that audio-post folks need to produce ambisonics mixes. Ambisonics mixes are in a format called b-format, which consist of four channels (for first order, nine channels for second order and sixteen channels for third order). B-format comes in two channel orders: AmbiX or FuMa.

YouTube requires AmbiX b-format ambisonics soundtracks, so this is what 360pan delivers.