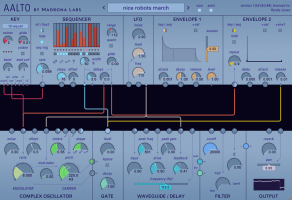 Aalto by Madrona Labs is a Virtual Instrument Audio Plugin for macOS and Windows. It functions as a VST Plugin and an Audio Units Plugin.
Product
Version
1.9.3
System Requirements
Requires Windows 7 or later. Windows 10 is recommended.
Product
Version
1.9.3
System Requirements
Requires OS X 10.9 or later and a 64-bit host.
Tags
Tags:Synth (Semi Modular)AaltoMadrona LabsMPESynth (Analogue / Subtractive)Synth (FM)
Instrument
Formats
Copy Protection
Key File
My KVR - Groups, Versions, & More
195 KVR members have added Aalto to 16 My KVR groups 256 times.
Not In Your MY KVR Groups
(or group limitation prevents versioning)
115 +1 I Own This
76 +1 Favorites
32 +1 I Want This Top 100
18 0 My Actual Studio
4 0 My Perfect Studio
+11 in private groups

Aalto is a semi-modular software synthesizer with a patchable UI, distinctive sounds, and "a charming personality".

Aalto's sound engine lets you create sounds that have been difficult or impossible to make with softsynths before now. At its heart is a complex oscillator, with FM, timbre and waveshape controls that enable a wide range of expressive sounds. Each voice also includes a lowpass gate, patchable waveguide / delay and a multimode filter.

Aalto is designed as much for sequencing patterns as for playing individual notes. Each voice has a separate, built-in sequencer with a patchable, independently controllable rate and offset that make it easy to achieve evolving, chaotic textures.

Aalto has a streamlined UI that lets you make complex patches quickly and easily. The two-dimensional, nostalgia-free interface has intuitive signal dials that let you view the parameters you are adjusting. Every control in Aalto is always right on the screen, one click away.

This is a review of Madrona Labs' Aalto synthesizer software. I purchased it from the developer a good while ago, but only recently really sat down and learned this thing inside and out. As many of you know, I make commercial preset packs for a bunch of synths, BUT I normally don't write reviews for synths unless something really stands out to me from a synth buyer's perspective. Aalto is one such synth, and I've grown to understand why Aalto owners love it so much.

One of the most logical and straightforward user interfaces I've ever seen. You can really _see_, visually, how each preset was made, just by looking at the color coded "cables" in the middle of the screen. MUCH easier to navigate than the chaotic spaghetti monster you see with complex patches on other modular synth software that tries to be as realistic as possible. IMHO, a more 'scientific', clean and sterile GUI beats old school realism every time.

MAJOR CPU HOG! When I made my MP3 demo for the 'Forbidden Experiments' preset bank, I had to bounce _EVERY_ Aalto track to WAV files. BUT, I'm on an older machine - single core, 3.6 ghz CPU, 2 GB RAM. The sound quality, workflow and interesting feature set make up for this, though.

Oh yeah :). Aalto is a very unique plugin. It doesn't offer a brand new type of synthesis, or totally unheard-of features, but it uses what it has in some unusual ways. The 'complex oscillator' is a blend of FM and VA synthesis, resulting in oldschool modular bleeps and bloops, crossed with a bit of a metallic digital edge.
I had a lot of fun with the repeating envelopes and loved the fact that you could, for example, take an LFO, and modulate the attack and decay times of that repeating envelope. The 16 step sequencer is the very heart of Aalto's special character, I think, and why it excels at strange, alien and mechanical sound effects. You have basicly 2 of them running. One where you set values for modulation, and below it, where you see the buttons, is a simple "on-off' pattern sequencer. You can route these as separate sources to affect very different parameters. Take an LFO, or envelope, and have it affect the "offset" parameter on the sequencer for interesting "scanning" effects. Another sweet feature is the ability to modulate the delay times for those comb filter and flanging effects.

There aren't that many, but most of what's there is really good. I loved the 'machine' type sounds and they really turned me on to using step sequencers more often. I typically never liked that kind of feature before.

Value for the Money:

I believe I got this on sale for $99 a while ago. Definitely worth it for its strong points. I get sounds out of Aalto that just aren't possible to make in Arp2600V or Massive, for example (I actually tried it haha). It's also a _very_ good educational tool for learning more advanced sound design techniques, as the routings are so easily and quickly visualized.

I would recommend Aalto to:

- Anyone looking for musical sounds that aren't the typical bread 'n' butter.

Aalto
Reviewed By morendifernt
May 25th, 2011

10 0
Reader, be forewarned: Aalto is my favorite soft-synth. If you're looking for a review with more "cons", I would check the much more professional reviews at Waveformless, MusicRadar, and elsewhere.

Going down the line:

INTERFACE: Probably as straightforward as it gets. All the controls are visible at all times. The only menus are for patch presets and for built-in tuning tables(!), of which I counted over a hundred, including African scales, Japanese, Gamelan, and several variations for Just Intonation.
The control dials double as oscilloscopes so you have a visual grip on each module's activity. You can turn the animation off, ostensibly to save CPU.
The action in Aalto is much like a touch-screen device: the values on a control will "jump" to whatever position you click on. I've heard complaints about this, but I take the opposite view: I wish all my software instruments behaved like this.
Nowhere in Aalto's design is any attempt to "look" like a hardware synth. No fake wood veneer. No virtual dangling cables. Totally 2-D and functional. It looks sort of like a _really_ nice Max patch. It looks like the opposite of Ultrabeat, which is really what matters.
How could Aalto improve here? An "undo/redo" function and more ergonomic patching.

SOUND: Different!! Finally. Unique and widely varied, but comparable to the sound of the Buchla 259, which inspired the design of Aalto's complex oscillator. That kind of beefy FM goodness. Great for percussion. Capable of stupid levels of bass. Excels at drones. To these ears the complex oscillator sounds way deeper than the two-oscillator FM synths.
Plenty of waveshaping and timbre controls. Also a waveguide/delay with enough range to be used as another oscillator. At extremes the waveguide feedback can sound like a nasty (in the good way) guitar or a helicopter landing on your house.

FEATURES: Well balanced, and not excessive. Aalto takes only a few minutes to get familiar with but then has enough control to keep you busy making a unique patch every day for the rest of your life.
Speaking of, I can't tell you how many HUNDREDS of patches I've made with Aalto. With a lot of other synths I've had such a bummer programming them that I've ended up buying expensive sound sets just to cut to the chase for the right sound. Aalto inspires you to dig in and roll your own. Similar satisfaction to patching up a hardware modular. I've heard more than one Modular Guy say that Aalto is their first, and last, soft-synth.
It's worth checking the dev's website for their thoughts on design philosophy and the things that make good instruments deeply playable.

DOCUMENTATION: The best instruments and tools don't even NEED a user manual. You just start playing them. This is one of them. But it comes with all the documentation you would expect. Online tutorials, PDFs, etc.

PRESETS: Comes with some good ones, usable, playable, and appropriate for demonstrating the different patching possibilities, though this is one area that could use improvement. Another plus would be better patch management (prev, next, A/B compare, etc), though the developer has indicated that forthcoming updates will include a lot of new presets, and possibly the ability to search for and share patches online from within the software.
The presets are cool, but, again, this is a synth that will probably have you making your own.

SUPPORT: Quick responses from the developer via email and Soundcloud. Seems like a small company owned by nice people.

STABILITY: Solid. Not a single crash in any host I've used: Audiomulch, Bidule, ReNoise, and Logic. Developer seems careful. Sometimes it feels like _too_ careful - the updates seem to take forever - but I would rather see a solid release later than a buggy, half-assed release sooner.
Heavy on CPU - with all voices going it's about like ACE in "accurate" mode. Not a bummer if you're able to freeze or render to audio. Was able to get twelve voices going on a 2009 model MacBook Pro without glitching (in the bad way). CPU load is also supposed to improve with imminent updates.

This plugin along with the rest of the Madrona Plugins are extremely underrated.