My KVR
EQ Plugin by Softube
$219
at softube.com
DetailsSwitch Section 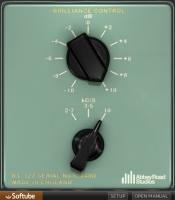 The Brilliance Pack provides authentic emulations of the EMI RS127 and RS135 EQ units, which were built in the early 1960s to supplement the EQ on the legendary REDD mixing consoles. These 'presence boxes' were used on countless seminal recordings at Abbey Road during the '60s, including almost every album by The Beatles.

The plug-ins retain the operation and response curves from the original hardware and provide control of frequencies which can improve the presence and definition of recordings and help instruments stand out in a mix. The software is compatible with all popular DAW applications and can be used on mono, stereo and multichannel tracks.