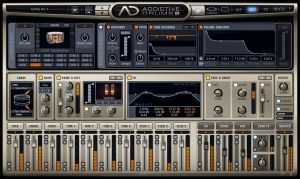 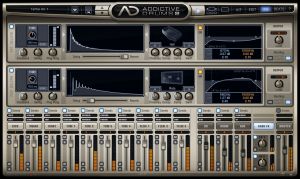 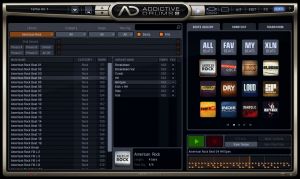 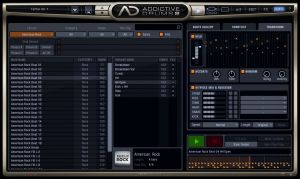 Addictive Drums 2 brings the world's finest drums straight into your music. You get outstanding drums, professionally-played rhythms, and phenomenal sound-shaping and mixing features that make your productions sound alive. All this with a fast, musician-centric interface that gets amazing results without getting in your way.

Average user rating of 5.00 from 5 reviews
Read all reviews Add A Review

Dollar for dollar, this is the best drum set VST you can buy. Not only are their sales incredible, but they offer discounts for teachers as well. The one I bought was the Rock and Metal edition because that is the style I play, and it came with also a Fairfax set, which is for all around pop and any music etc....so its complete but geared for metal.

And man is it! The Adpaks and Midipaks for Metal and Rock are excellent, you can build a song in seconds, drag and drop MIDI thats ready and segmented into parts (which is like SD3 but the interface and gui is superior).

The presets, kits, and grooves, all just come together perfectly in a balanced way - even though its the most extreme metal and rock VST, it actually is quite easy to handle unlike SD3 or BFD3....which require some tweaking, and mixing your own sets and kits....too much tweaking and settings for a non-drummer. Thats' the difference -

XLN is the happy medium between EZdrummer2 and SSD4 or 5.5 which are very useful but overly basic - bare bones VSTs and the top tier SD3 and BFD3, which are DAW's in and of themselves for drums. That's not to say they are better, they are just much more tweakable.

Addictive is compact but because its processed with 8 channels, it makes things very easy as all kits and Paks correspond to the same 8 pieces, so you can tweak the tones and sounds of each instruments. The studio tweak ability is somewhat like Logic Drummers, its not a lot, but its there and its enough.

These are virtual drum sets, or drummers, and special features are what stand out to me. Now to this point XLN wins in the overall, but not only is it simple, easy to start a song, and make great sound kits with, it also is easier to adjust than the rest. You can transform the sound, style, and MIDI programming of each groove you drop into the editor, and it's really cool to be able to get the same back bone while the pieces may change in their amount, velocity, timing or whatever parameter.

For the price, you can't get a better a deal, and it does fall between EZD2/SD5.5 and SD2/BFD3 - at $150 (on sale its under $100 though), especially Black Friday and summer time...so fi you are a metal guitarist or metal musician, or hard rock producer, and you wanted ONE best all- in one package deal - it would be this.

Ive been using AD since version 1. One of the best purchased Ive made. I don't use this all the time, but when I NEED acoustic drums this is what I always use.

It's not the most feature robust, or the most detailed, or has the most expansive library.. but that's ok.. because it falls right in between all of the categories to make it a really good product. It's dead easy to use. It wont kill your CPU & loading up things are a breeze. Version 1 was kind of limited, but with the new version having 18 drum pieces vs 12, with more tweakability & better libraries, it's come a long way.

Im a firm believer in practice makes perfect. The 1st libraries for AD were pretty good. Not highly configurable, but good nonetheless. As time has evolved I believed XLN has definitely upped their game. Each of their expansions has a particular focus, but they can all be used within in genre you choose. The new Boutique Mallet library is unique & probably one of the best so far. Along with the Vintage Dry, & Black Velvet & Session percussion, they really make AD functional for a wide range of uses that don't bog you down in the CPU or in creativity. Could it do more & have mroe features? Yes... but I think many more features will detract from its character rather than add.

Alot of people frown upon anything but the absolute best. Sometimes the best thing to use is what is functional & expands as you see fit. This is AD2 in all it's glory. Every year I buy something new from them. Good company, good product .Oustanding sounds.