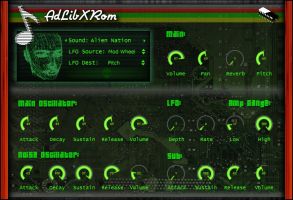 AdLibXRom is a plugin instrument featuring the sound of the AdLib Music Synthesizer Card. Famous in the early nineties for being widely used in PC computers, the AdLib soundcard had a synthesis chip build by Yamaha. This chip was the YM3812, an FM and additive synthesizer which had up to 9 channels of the digitally produced sound.

Each channel had two oscillators that could be modulated by three different waveforms. The result is what was heard in the computer video games of the first half of the nineties.