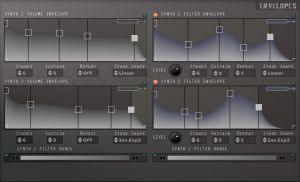 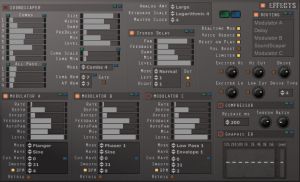 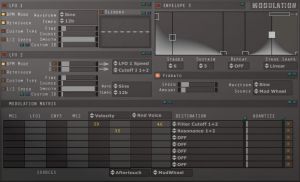 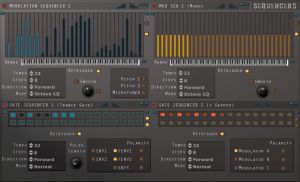 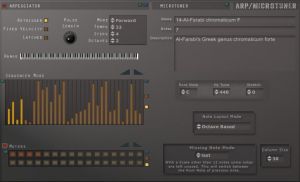 Ammonite by Homegrown Sounds is a Virtual Instrument Audio Plugin for Windows. It functions as a VST Plugin.
Product
Version
1.21
Tags
Tags:Synth (Hybrid)AmmoniteHomegrown Sounds
Instrument
Formats
Copy Protection
None
My KVR - Groups, Versions, & More
11 KVR members have added Ammonite to 6 My KVR groups 14 times.
Not In Your MY KVR Groups
(or group limitation prevents versioning)
6 0 I Own This
4 0 Favorites
+4 in private groups

Ammonite is a feature packed dual synthesizer, powerful, yet intuitive to use. It comes from Homegrown Sounds' line of Astralis Synths. Whether you want a synth capable of undulating atmospheres, or Kraftwerk/Orbital style sequencing or cutting leads, Ammonite is capable of this and much more. A strong point of Ammonite is that it can be used to good effect on a superficial level by people less experienced with synths, and the deeper elements can become apparent through usage.

Each synth section combines 2 Oscillators and has various Modes which decide how they interact with each other; such as Add, Subtract, Dual Pitch and FM. Each Oscillator is capable of over 3,500 waveforms ranging from the usual suspects, such as Sine and Saw, to FM bell like sounds, through to cutting digital Waves. There is also a healthy assortment of filters from Low Pass, Hi Pass, Band Pass, Shelving and Comb, which are cascadable up to 8 times. There are two 32 stage Envelopes per synth, one dedicated to the Volume, and the Second to the Filter, both capable of repeating a range. Each synth is completely independent and has its own FX send level, Noise, Tuning and Drive.

The effects section, is comprised of the newly developed TerraNova FX system which has 5 main effects including SoundScaper, Delay, and 3 multi-purpose Modulators which can be used to do a large assortment of Modulating effects such as Flanger, Phasers, Ring Modulators, FM, Pitch Shifters, Filters, Mod Delays, Decimator and synth tones. These can be routed in any order using drag and drop routing, or randomized using a dedicated randomizer. Other effects include, Harmonic Exciters, a Compressor, an 8 band graphic EQ, Low and Hi Cut, plus Drive with 4 different modes.

As for sequencing, Ammonite has an assortment of options which include a Polyphonic Gate Sequencer capable of triggering any of the 5 envelopes, plus a unique way of using a polarity setting to trigger Synth 2 on the off positions, as well as either of the filter envelopes. There is a second monophonic gate sequencer which is dedicated to driving a Gapper and/or re-triggering the LFOs in the FX Modulators. Finally there is a full featured Arpeggiator/Sequencer, which can do all the classic ARP stuff, plus can be programmed as a one note sequencer, with an additional Muter mode for deciding which steps will sound. The Muters can be used with the standard ARP Mode, and along with independent step size can create unique ARP patterns.

On the Modulation front, there are many options including 2 multi purpose Modulation Sequencers, 2 LFOs, 5 x 32 stage repeating Envelopes, Vibrato, Randomizer, as well as the usual assortment of Velocity, Aftertouch and Mod Wheel. All of these can be routed through a Modulation Matrix with up to 8 sources mapped to 7 destinations. There is a large selection of destinations, making it a very configurable synth for those that like to delve into the depths of synthesis. There are also two XY controllers on the front page which can be assigned to a multitude of parameters.

There is a useful built in Recorder which is capable of recording at 16, 24, 32, or 32F bit-rate directly to disk. It can be set to record to a custom location, and it will automatically name the file using tempo and date/time. Furthermore, it can either be used to record manually by clicking the record button, or can be set to record a sample accurate 'x' number of bars, which makes making loops very easy – ready to load into any application which uses WAV loops.

Other notable features are the Microtuner which uses standard Scala files, an Analog mode with 4 different levels to fatten/warm up the sound, 48 note polyphony (2 x 24) with the ability to choose a custom polyphony below that, individual glide and pitch Bend per synth, and Spread for randomizing stereo placement of voices on each note on. There is also an extensive randomization system built in, there are small blue buttons throughout the synth which will randomize nearby controls, as well as a Global Randomize button which can be configured to randomize targeted sections only.