This product has been replaced by: Omnisphere 1
Atmosphere by Spectrasonics is a Virtual Instrument Audio Plugin for macOS and Windows. It functions as a VST Plugin, an Audio Units Plugin and an RTAS Plugin. 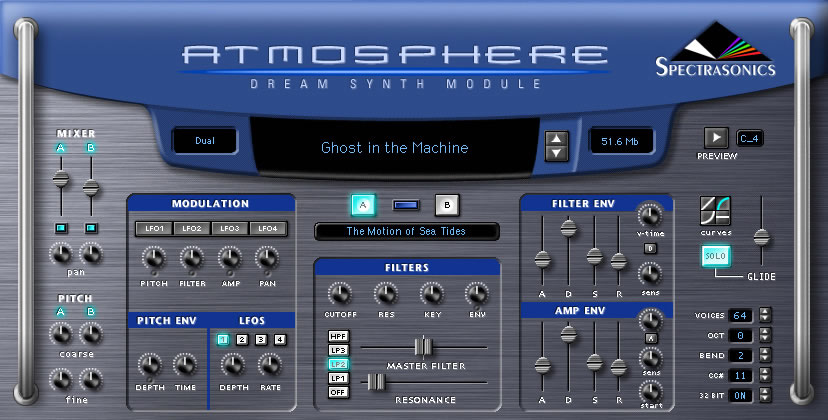 I reviewed Atmosphere on Patcharena after owning it for about six months, and gave it 4/5. I have now owned it for a few years and I'm going to give it top marks. Here's why I feel compelled to amend my initial thoughts.

Initially, my only complaint was that it was too professional, too polished, and stood out too much in my mix. Now computers, software and interfaces have come a long way, and I realise Atmosphere was just four years ahead of its time.

My Access Virus has taken over most of my VA duties, and with such a powerful synth I have taken to weeding my VST arsenal to those that can compete. Interestingly, my default setup is now all Spectrasonics.

I love its clean interface, and for me seeing this blue monster on the screen reassures me of its quality. The LFO sync 1.2 update really helped, too.

Sound quality is still second to none, and the presets are still amazing. Take any lead sound, add your choice of effect, and just play away. Eric Persing is a world class sound designer, and this synth shows that quality input results in quality output. The pads are especially good, and using the computer's power results in some sounds no waveform-based synth could produce. The strings and the ambience drones are still called upon weekly!

Features? Gets 9/10. The basis is still ROM, and as such you cannot alter basic waveforms or deviate too much from the base sound except using filters and simple LFO functions. It's more than compensation that the supplied sounds are so diverse and so impressive. The reason for 9/10 is the hope that any upcoming Atmosphere "2" will add RMX style 'chaos' and 'FX bus' sections.

Documentation has always been good, and this VSTi requires little in the way of manual page-turning once installed. Load a sound, play, eventually remember you're supposed to be recording something! Another issue is the Challenge/Response protection. The website is 24/7, and reinstalls are allowed indefinitely with a minimum of fuss. You feel that the whole setup is geared towards the jobbing professional, where downtime could mean lost revenue. If only all Challenge/Response setups were this simple.

Arguably expensive at £225, but three years of usefulness and more to come, with much lesser ROM based and synth based plugins in the same price range. I can think of a number of 'big name' plugs I feel are overpriced. This is underpriced [but don't tell Spectrum!] With even the benefit of hindsight, I'd pay as much or more for this as I did. And I'm sure Spectrasonics would be as reasonable with upgrade pricing as they were with RMX.

Reliable? This was the first VSTi I bought. I have, like us all, bought many since. Some I still use,but a lot I don't. And this synth has never, repeat never, crashed, blue screened, failed to load, lost registry keys or stalled my host; despite computer changes, hard drive formats, sequencer changovers. That's a 10/10 in my eyes.

No definite word on an update yet, but here's what I'd like to see: RMX style FX busses, more incredible presets, the ability to name your own presets, and the ability to layer more than two sounds. Perhaps even some tempo linked 'variphrase' style sounds from the 'Symphony of Voices' library, if that's at all possible!

Apart from that, this synth keeps getting more relevant to my musical needs. A thankyou to the Spectrasonics team!Read more

Atmosphere is an extremely useful and inspiring tool for just about any electronic composer/arranger......not only for new age and soundtracks and special effects (which Atmosphere is obviously well suited for), but also for pop, dance, and even classical.

Most of the sounds fall into the categories of evolving soundscapes, lush pads, bell tones, and complex unusual timbres that can be dreamy, spooky, trance-like, and eerie.

But one of the big surprises for me was the string patches: they are simply gorgeous, and they instantly inspire all kinds of melodic/harmonic ideas. you can get lost for hours sitting at your keyboard with the Cathedral Strings or Adagio Expressivo patches. Unlike most ROMpler/workstation generic string pads, these strings are actually good enough for classical arrangements! It's true that a "dedicated" orchestral library like GPO or EWQLSO Silver will give you more "realistic" sounds and a greater range of articulations........but those sounds, in all their pristine purity, don't "inspire" me to make music the way the Atmosphere strings do. You can really fatten up your orchestral arrangements by layering these sounds behind your "real" string parts.

My only real gripe is that, just as with Trilogy, some of the patches don't come with enough velocity sensitivity for my taste, and you have to manually adjust this to get it just right.Read more

I've owned this for quite some time, and it's long overdue for the review it deserves.

In short, this is some of the best money I've ever spent. I don't understand when people say that this is overpriced...thousands of sounds and over 3 gig of info and presets for roughly $360.00...fantastic!! I paid over $600 for my Roland XV-5050 which has far less waveform content, and lacks the overall quality of the sounds in Atmosphere.

It's GUI is very elegant and just looking at it tells me I'm using something cool. Some may consider it a bit large, but I think it's perfect. When I have a GUI up I want to be able to see it. You can always minimize or close the window. I think it's far more annoying to have a GUI that is too small (Imposcar for example is a little too small for me).

The sounds are really, really, REALLY, good. Although it is a rompler, you do get to adjust some basic "synth" paramaters. Also, the ability to combine sounds to make your own patches is cool. It covers Atmospheric sounds really well "duh!" but surprisingly, it's not a one trick pony. It also features quite a selection of synth sounds sampled from your favorite big name hardware synths as well. Some basses are included as well, but are the most limited of the bunch. Pads, some fantastic strings, sweeps, and drones are the main focus of this product, and I couldn't think of anything Spectrasonics missed.

The presets are fantastic, and inspiring, which is what I look for in a rompler.

Now, my only couple of quibbles are....

1) No syncable LFOs yet. This was promised, and apparently still is, but instead of with the current engine (from my understanding it came to light that they can't achieve it with the current one) it is likely we'll receive it with a most likely "paid" upgrade to a newer version/engine.

2) Loads into RAM. I know, obvious right. BUT, if you are at all lacking in RAM keep in mind some of the larger patches can EASILY consume over 100 meg of your memory, and we're not even talking multiple instances yet. I don't particularly care that it doesn't stream from disk or anything, just something one of you guys may have a problem with. On the note of multiple instances though, Atmosphere has EXTREMELY LOW cpu usage...so load them up if you've got the RAM.

Basically, if I was forced (and I mean FORCED!) to whittle down my collection of VSTs, there's no way I would even consider putting this one on the chopping block. I think that says it all.Read more

Atmosphere is a collection of wonderful pads created by synthesizers and effects I could never afford. The number of patches is overwhelming but arranged logically into subfolders with names that give hint to their sound and source. The variety is great but tweaking of patches is limited. The UVI engine cannot perform a fraction of the synthesis functions used to create the sounds. Thus, Atmosphere is more like a simple Rompler than a synthesizer. In exchange for the limited editing of patches you gain CPU efficiency. Other VSTi’s can create patches that compete with the sound of Atmosphere but they do so at many times the CPU overload. The one thing that Atmosphere does need is lots of memory. Some of the samples are very large and Atmosphere does not use streaming. If you use many instances of Atmosphere then you will need in excess of 1 gig of memory. This should not present too much of a problem as you most likely will not be using many pads in one song.

User Interface - Looks nice but too large.
Sound - Absolutely wonderful.
Features - Not many to speak of unless you count all the synthesizers and effects units used to create the sounds.
Documentation - Just enough, supplemented by a Yahoo group and interaction with the developer.
Presets - More than you can keep up with, and they are great.
Customer Support - Hard to say without customer problems.
Value For The Money - Good, even for the expensive price.
Stability - Never crashes my system.

I would buy it again.Read more

Sweepy, dreamy, tinkly, rich, deep, I could go on forever describing what Atmosphere, and it's that and more. If there ever was a synth that was based on value for money in a per-usable-patch comparison, this has got to be the best $369 you could spend your hard earned cash on. While that price might be off-putting to some, it's a dream come true for those of us who lust after pads, and it delivers the goods. The one thing that would have been nice though is if the slow attacks on the sounds were not already incorperated into the sound themselves, and gave the end user the ability to adjust how fast the attack was would have been a very welcome addition. Also, we're still waiting on syncable LFO's, but still hoping the wait is coming to an end soon. So if you've ever dreamed of rich texture beds to lay your sonic works of art gently into, Atmosphere is the place to rest your dollars in.Read more

Hi everyone, i will ask something maybe stupid or not, but it would be very helpful for me if you can give an answer.. I'm not a keyboard player, but i use keyboard vsti plugins usually. One of the vsti i use is Atmosphere (spectrasonics), and i've found that the main data file, with the sounds, is a unique 4 Gb file with the .dat extension. I would like to know if it's possible, to "extract" certain sounds from this 4 Gb file and use it with a real synth, or some way to get the wave file of that sounds i'm interested in.

I know it sounds very ambitious but due to spectrasonics atmosphere doesn't exist as hardware, i needed to ask. This question extended to another vsti's as well, like Nexus, or Plugsound......

Thanks a lot for all.

What are you trying to play the sounds with? Hardware I mean?

I am very annoyed : i bought my atmosphere VST in 6 cd on Ebay to an english seller several years before; The serial number and challenge i used worked very well. Then, after several years, my computer was KO ; i have just bought a new one ; the registration of atmosphere doesnt work anymore. I have called spectrasonics : no way they tell me that i do not belong to their buyer base ??? so as my reisgtration number . I have sent them a photo with my 6 cd but no way??? They just advise me to buy omnisphere 2 ... but i cant pay 400 € ; and anyway i have already paied for my VST. I dont want omnispohere ; i jus want my atmosphere. They dont accept. Could Someone help ?