Atonoise by HG Fortune is a Virtual Instrument and a Virtual Effect Audio Plugin. It functions as a VST Plugin. 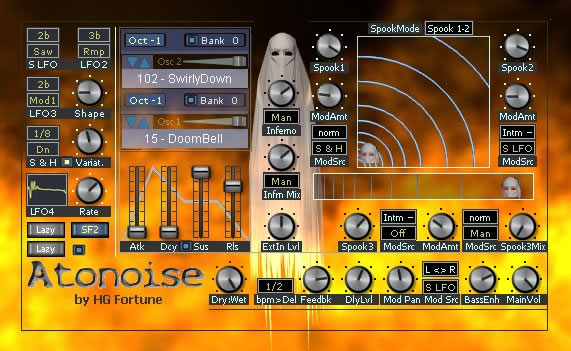 Atonoise is a VSTi synthesizer (with Pro and VST effect versions too) for spooky, Sci-fi and other similar sounds. It has not got a filter, by design, and you'll hardly ever hear the basic waveforms of the two oscillators, which just provide different flavours to the modifiers. It works atonally, i.e. with no real defined pitch, therefore it is suitable for various kinds of spacey and noisy sounds, which are created by four modifiers:

Who produces electronic music and has an album ready?by EMReviews @ 11:11 in Everything Else (Music related)

Continue this sentence with song lyricsby Aloysius @ 10:53 in Off Topic Classics