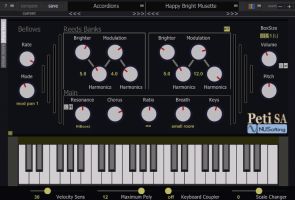 Peti SA uses hybrid FM/PM* synthesis technology to emulate the sounds of the Harmonium and Accordion, members of the Reed Organ family.

Traditional Reed Organs operate by means of hand-or foot-driven bellows, which pump air over metal reeds to make them vibrate. The Reed Organ dates back to 1840, when the Harmonium was patented in Paris by its inventor Alexandre Debain. But the so called "free-reed" instruments are much more ancient, like the Chinese mouth organs. The famous Melodica is also a "free-reed" instrument.

The Harmonium in its smaller form is widely used in north Indian music and, as derivation, in pop and rock music too for its full and sweet sound.

*[FM/PM = Frequency Modulation/ Physical Modelling, Peti plugin does not use samples or wavetables].

Within the new Peti SA the synthesis engine has been improved (from the previous Peti 2.1) allowing more variations and better emulation of many harmonium and accordion types.

Peti SA also emulates various features of the Harmonium/Accordion, including the noise of air in the bellows and chambers, a "musette" tremolo feature, and "key coupling" allowing a single note to trigger two voices. Keyboard noises are also emulated.

Peti SA provides features to control many parameters while playing: a MIDI CC value of choice, Aftertouch and Velocity.
That allows for instance a ModWheel or an expression/volume pedal to be used to enhance the natural performance of the emulations.

Features: (See the [New in Peti SA] label for the new features).

Two Reed Banks, the core sound generators, with the same parameters available independently for each Bank.
The two Reed Banks are not identical, swapping settings between Bank 1 and Bank 2 will subtly change the overall sound.

The parameters available for each Reed Bank are:

Demo limitations:
- Sound mutes after 20 minutes, reload the plugin to play more.
- Plugin state is not saved in the DAW.

About the "Peti SA" name.

The name "Peti" comes from the Indian portable version of the Harmonium ("peti" literally means little box in Hindi), although the structure is closer to that of a Western harmonium, small sized.
While the Peti word ("portable harmonium" in Hindi) has been chosen as a tribute to the huge tradition of portable harmonium usage in India and Pakistan, "SA" has been added to the name of this new version of the plugin both to signify a new start, since SA is the name of the first note of the Indian scale, and as a tribute to the European origins, whereby SA refers to "Suprema Armonia", for the centuries old tradition of accordion builders in Italy. You may also consider the SA to stand for Supreme Accordion due to the enhancements in Peti SA for its accordion emulation.

Average user rating of 0.00 from 3 reviews
Read all reviews Add A Review