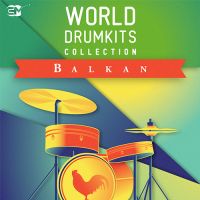 World Drumkits - Balkan bundle contains a smooth sounding grooves and patterns of the Balkans played on a western drum kit.

Get access to a unqiue library of Balkan grooves. These patterns includes a wide range of traditional and non traditional grooves and beats from various countries such as: Albania, Bulgaria, Macedonia, Romania, Serbia and Greece.