Bandecho by Bluenoise Plugins is a Virtual Effect Audio Plugin. It functions as a VST Plugin. 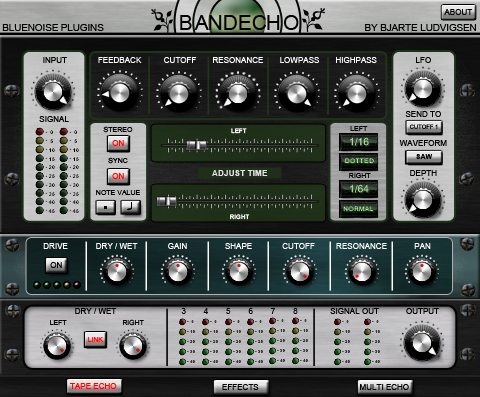 Bandecho is a plugin modelled after vintage tape echoes like Roland Space Echo and Watkins Copicat, but with several extra features. Bluenoise Plugins believe that the sounds you can get from this plug-in are far more versatile than any tape echo on the market.

Tape echo rack
Bandecho actually consists of eight echoes and not one as you might think. The first is the stereo tape echo that is the heart in the plugin and what drives all the other functions. This echo can be up to 5 seconds long and can be synced to your host BPM for easy beat making. The readouts automatically change from milliseconds to beat when set syncing to host. You can change from regular quarter notes to dotted and triples. The two sliders adjust the time and in stereo mode you can set a different echo time for left and right. This is something you can't do in a real tape echo. It also has some very interesting filters that can make the echo oscillate new tones and a LFO that can modulate different sources like the mentioned cutoff filters and panning.

Drive rack
In Bluenoise Plugins opinion an echo needs a distortion part to sound great and this drive is something special. Because it has a cutoff and a resonance it can self oscillate and create tones inside the distortion. Basically you can send the whole signal through the oscillating distortion to make it sound warm or to give it more bite. This is very useful if you want to create a vintage sounding echo.

Effect track
The effect rack consists of several unique effects perfect for making the echo shine... or should we say crackle. The first part is the Old Tape which makes the tape slow down and speed up like a bad tapehead. The next part is the Granilizer which really gives the tape a dirty sound. It crouches the echoes down to small fragments. At the bottom there is a Chorus and that does what you expect. On the right-hand side is the Comb Filter which is the second echo stage in Bandecho. By adding a super short delay we can make each echo taps sound like tiny reverbs of their own. It kind of gives the feeling of sending the echo signal into a resonating small room.

Multiecho rack
The multiecho rack consists of the six last echoes in the chain. The first two are taken from the input signal making it two extra basic echoes. The third and the fourth are taken after the distortion part and will echo the distorted signal. The last two echoes are taken after the combfilter and will therefore have all the different processes included when echoed. These six echoes are some of the unique about the plugin and the main reason why this echo can do insanely wide and complex delay lines.

Output rack
The last rack is the output rack where you where you can set the plugin up to be a send effect or an insert effect. It also shows the outputs for all the different delays.

Audiaire Expansion Pack Sale: Take 30% off of all expansion packs